Hello. Please see attached The Dingo Poem. This poem is one of the longest poems I’ve written and took the longest to write — about two months, and then a few revisions in the preceding months. The notes were written while hiking the Larapinta Trail in 2016.

The length is not conducive to posting as an image so you’ll have to read as pdf. Hope that’s cool. Thanks

Ken lay awake, content in his sleeping bag, and thought about how this short journey was beginning to end. He imagined boarding the plane tomorrow and how the inflight procedures were identical to the ones he witnessed on his way out here, but would now feel in reverse, as if all that had been built, the friendships made and landforms experienced, were being unravelled. He would arrive at the airport early, he thought, putting on his beanie, and sit at a bench and try to summarise his last twelve days on paper. He knew this trip was not about details. Twelve days was not long enough to get a feel for the subtleties of Alice Springs, the West Macdonnell Ranges and Uluru. It was too late to learn even a single word of the Arrente language, he told himself, but he’d be better prepared next time, if there was a next time. In less than twenty four hours the plane would taxi to the take off position and a baby would be screaming and the professionals would be reading, and he’d remember a critical comment a hiker made that allowed him to realise that when you spend most of your time traveling you rarely spend long enough with anyone to see the nasty side of their character. Lying on his back on the inflatable mattress that had developed a slow leak, Ken looked up at the stars and the tops of the ghost gums and the outline of the gorge falling to the sandy riverbank where he lay, and he thought to himself that we allow ourselves to roam where nothing is sacred, that we’re afraid of going to sacred places for fear of spoiling them with our presence and that it’s better to have been to a sacred place without knowing it is sacred, that the landform is merely a landform where no rituals and stories had taken place. That way you avoid being culpable of destroying the magic of the place. The rituals we do hear about, Ken repeated to himself, tell an ancient story of ownership through having lived there, and you cannot know the stories that make these places unless you live there for a long time.

A kind of interloper, Ken concluded he did not have knowledge enough of these stories to respect the places as they should be respected. He longed to be given the truth of the situation, instead of having to determine that truth for himself, for then he felt he could understand clearly what was the admirable way to behave and the best possible way to look after the land. As he lay out in the open this ambiguity kept him awake and he knew that he never fell asleep on his back and that he might sleep for an hour or so on tomorrow’s flight home.

Ken’s thoughts, as always, were about the next day, the next passage that awaited him and as he watched the flight path of a plane overhead he imagined himself the next day reading the inflight magazine with the grey kangaroo on the front and he would read through from cover to cover the mining advertisements and the articles about miners and then he would look out the scratched window overlooking Alice Springs and know he’d been down there somewhere and that when he was there he could not see the shape of the river as it cascaded between the ridges and conglomerates and he could not know, as he later read, that no water had flowed there for hundreds of centuries when the entire region was submerged in salt water. Now when the rains fell only puddles formed on the surface of the riverbed and a subterranean stream may trickle slowly on top of the cap rock. Ken pulled his sleeping bag upwards to allow his body enough space to rotate so he could lay on his side and the mattress made a crinkling sound and then he sensed movement under him and he sat up and saw in the depression he had dug where his canister stove sat, the sand turning to a darker colour. He knew water was rising all around him and at first he thought of collecting his belongings and moving to higher ground, the liquid now filling the spaces between the ridges of his mattress, yet he could still feel the ground firm underneath him. He unzipped the sleeping bag and pulled his legs up to his chest to remove his feet and he threw the sleeping bag on top of a large boulder nearby, and at first he was scared but he soon realised the water was not flowing downstream but coming straight up out of the earth and now the mattress was holding his weight and keeping him just below the surface of the rising water. Leaves and twigs circled around him and his empty water bottle, shoes and headlight floated nearby. With his legs in the water and his lower half now soaked Ken grabbed the headlight and pressed the on button and looked below as his feet could no longer touch the ground he could see the groundsheet held down with rocks. In the opening of his backpack he shone the torchlight on his notebooks and at first he was sad to see that they were now ruined, saturated with clouds of blue ink spiraling to the surface. He knew the notes for his stories were now ruined, and a condensed sense of the effort he put into compiling them now struck him, and he winced and shook his head in disappointment, and from the surface of the water he collected his small lighter and put it in the fold of his beanie to dry. A whining from a dingo could be heard and Ken made no hissing noises to stop her.

Im conducting a site analysis of the Ashfield Flats; a wetland near where I grew up. On the 19th of March I walked through the flats with a video camera. You can watch the video here:

‘No unauthorised vehicles passed this point’
The sign, twenty metres beyond the fence;
Galahs cackle overhead.

As if in distrust of the drain
Houses a but the 100 year flood line
Stink from the drainage block.

My body moves expectantly
Barefoot, aware of tiger snakes
A stick wrapped around my ankle.

MWB infrastructure tagged with ‘SK’
As alien as the stand of tapping bamboo
Within phone range, without credit.

Sweet mud smell, the hill you slide down
On tin, the old man keen to shoot to shoo
You away, his property as far as his scope.

To kill the grass they kill the liquid amber
Yellow bamboo pole matresses
The ‘clean fill’ sand will absorb it eventually.

More graffiti on blocks thick with melaleucas
A safe place to practise, DK in red texta
On paperbarks, more practise.

Rows are rows of planted tulips: a concerted
Effort to pretty the place up, beside long lines
Of blackberry bush, an air conditioner hums.

I become impatient, lustful and lacking narrative
I pause on the authorised vehicle track
Parrots squawk, a German Sheppard barks.

A netball ring attached to fence
Bark crunching, parrots munching
A train a truck an aeroplane.

A fences, a concrete path
A stream sidled by casuarinas
Hesitate to use the word weed.

Dog shit on the side of the path
A few days old
Clear blue sky overhead, hazy at the horizon.

Go right, I go left, through the thicket
To much of a sissy I stick to the path
The birds becoming louder.

In imagining the future I left the present
And missed the approach to the foreshore
A flat pyramid of arrow, ground cover.

A kelpie freaking out over rollerblades
Fallen trees, their rotten roots
Suspended in floating mud. Not a sculpture.

Nor is this paradise, the river, in pieces
Has kept clear, held back proper light
Part of the river begins here.

The DC266 Evenrude outboard dingy
Its fishermen, shiners of the torch
Throw cigarette butts in the water: 18:35pm.

The last of the sunlight, duck tracks,
Great Egrets picking at the rushes
Mistook them for a chip wrapper.

Still as salty as the day purchased
At the supermarket:
The Great Egret Supermarket.

I jump off the bridge – heading home
Find a toy walkie talkie, possibly from the stealth bomber:
You used to be able to see the bottom, over.

‘Surprised by the amount of water in here
At this time of year, over.’ No frog noises
So silence. Still, plenty of mossies and guppies, over

‘Copy, over.’ Walk around puddles.
Now it dawns on me —the camps—
We used to see as kids, the piles of rubbish

Buckets, blankets, remnants of small fires
Were aboriginal camps, a midden under my nose.
‘Fucking Hell’ sprayed blue on a she oak, a totem.

Car wrecks half way up the drain
When the water’s high become tip islands
Rusting ruins: they dont make ‘em like they used to.

Clay sediments and oxidise metal mixing:
Follies of the future,
Slowly leaking into the creek.

You can see the wet line on the side
of the drain, the high water water mark
A white horizontal line of phosphate

Brief:
Cottesloe Beach Carpark
Finalists must demonstrate an architectural vision for the long term preservation of both the social and environmental fabric of the urban beach. Above all, however, entrants are encouraged to pursue their imaginations, and not only design but imagine proposals which heighten the experience of this threshold between built environment and sea.

Concept: The Involuntary Prisoners of Paradise: Back in the seventies, Rem Koolhaas borrowed an idea (of a linear city running directly through London) from a group of radical Italian Florentine architects called Superstudio. Here in 2006, we borrow from Koolhass’s Exodus or The Voluntary Prisoners of Architecture in our own ‘Superstudio’.

sit alone indecision
park over there
no, the other table.

toward reflection with steel nerves.

I know a man
who, like indecision
smiled before exiting the table
and left his jacket behind

this is the truth

he returned with two smiles
took the jacket from the back of the chair
looked poignant
and left a second time.

‘excuse me, do you mind if
we share your table?’
no, not at all.

a father and son
may be three or four

‘look at the peafowl’ says the father
swivelling the son on his lap.

i’m reading William Carlos Williams
while on the grass
beyond the moat
past the peafowl
four teenagers throw
honky nuts at a dented
steel bin. i know
from before the dents
are from soccer balls
not honky nuts.

“with the passing of time, the outcome of my failure with you has been the complete damming up of all my creative capacities in a particularly disastrous manner such as I have never before experienced”

i look the boy deep in the eyes
he smirks, convulses, burps
those eyes start watering, burp

the father: ‘not as pleasant as poetry’

but it is IT IS

they leave slowly
without a word. 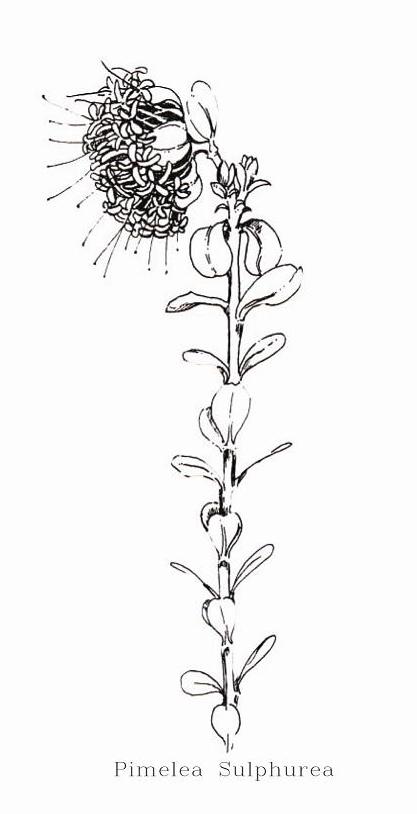 For uni, we’re to examine a particular species of Western Australian flora. Typically, the species is rare, endangered and endemic. Our mission is to go to the WA Herbarium, find the particular specimen(s), examine, document and find as much information on the plant as possible. The point of all this is to produce a series of botanical illustrations to prompt us to think about bio-regions at a local level of detail.