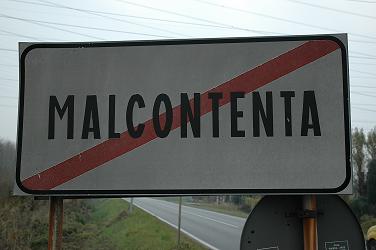 Two friends and I won a national student architecture competition last year, the prize a trip to Venice for the biennale in November. We organised to stay at Fusina caravan park run by a guy who spends half the year in Perth. Over dinner one night we asked about the closest Palladian villa to check out on our travels.

‘There’s one in town’ he said.

‘Yeah its just near the pizza shop’

When we got the pizza shop a domestic was unfolding in the street. Ten or so people trying to stop a very old mumma from riding her bike. One woman in particular, possibly her daughter, tried to physically restrain her. This is when the yelling started from the seated, yet motionless tour de Italy geriatric. People coming out of their houses to watch. In any case the old momma broke free, found her pedal and rode off. She over took us, very determined. By the time we reached the bend the woman had long since disappeared out of view. Yet the crowd were still discussing the matter 500m away outside the pizza shop.

The front entrance of the villa was closed. Only open April to October. The villa is sweet and the reason why it was build was even more interesting. Malcontenta is a temple style villa built in 1560 for Nicolo and Foscari families. The villa was commissioned to keep the lady of the house banished from Venice island in chastisement for dissolute pleasures. Therefore the front half of the villa looks very bleak and uninviting and the back half, where the owners wanted to keep her, is attractive and liveable.

After the people had finnaly broken up so they couldn’t see us and a quick jump over the mostly dried creek, we stood poised before the semi-thick trees and vines that blocked our way into Malcontenta. Pushing my way through the trees, the villa emerged some 80 metres away. Julius handed me his camera and I took some snaps while Paul and he joined me. We stood transfixed for a while. Julius and I decided to get closer. Paul was very nervous about the idea, stating:

‘Ive got a criminal record, Im not sure about this.’

You may aswell go back, I said, you’re making us nervous too. 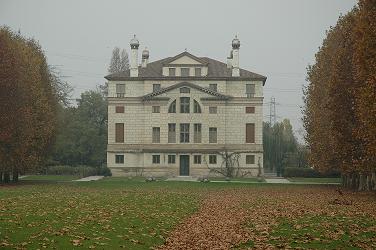 A row of trees off to the side of the paddock led to the left back corner of the house. We followed it for shelter, hoping no pack of wild dogs come running out to tear us to bits. I was imagining some little creepy woman sitting in the villa watching, giving the order to release the hounds. I told Julius to keep taking photos so it looked like we’re interested in the architecture and not there to steal shit. (There were a lot of cops in the area due to high prostitute number and we’d already been stopped twice, checking our passports etc.) So far we saw no-one, not a soul, which made it more creepy in a way.

We made out way around to the front, past a small formal garden, the gravel crunching under us. An old man watched us from across the moat that ran in front of the villa. He knew we weren’t supposed to be in there. ‘All that could happen is that we’ll get kicked out’, I said to Julius. The dark overcast sky added to the gloom. The notion of trespassing in a foreign country added adrenaline to the concoction. Julius went up to the front column and I took a photo of him. Just then a noise of a tractor could be heard. The tractor stopped out front of the villa. The engine kept running, but I heard a door slam. Then footsteps could be heard coming around the side of the villa. We were trapped by the villa and the moat. Julius walked to the opposite side of the villa but I stood my ground, hoping that the groundsman would understand. Quite well kept, but hardened, the grounds man approached with a frown on his face. He couldn’t speak English, me no Italian. With the camera I motioned to the villa to signify some universal tourist language, saying ‘Australia, we’re from Australia, perdoni, perdoni.’ 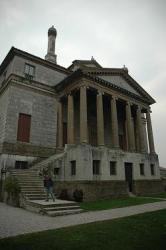 At that point a smile rose on his face. He motioned for us to follow him around to the back of the villa. He turned the engine off in the tractor. Grabbing a pack of Marlboro’s, lighting one up, he went to the back door and opened it up. Julius had joined me by now seeing that it was safe. We walked through the Bacchus and Venus, The four Seasons, Rural work and Myth of Prometheus rooms. Julius saying that it is ‘a pretty shitty master plan, really.’ By the time we returned down stairs the groundsman ha d a pot of coffee on and his wife had come over from the outhouse. She could speak English. She invited us to stay for lunch. Turns out they had been looking after the villa for 18 years.

Drunk, and full, two hours later we left. Half way up the driveway we remembered Paul, who we found sitting on the side of the moat, dejected and bored.

But that’s not what actually happened. We were trapped. The groundsman and his wife cornered us. Julius tried to run to the front gate, but it was locked. As he attempted to jump the fence, the groundsman grabbed him, pulled him to the ground and sat on him. Defeated I simply stayed out the front of the villa, next to the tractor where his wife waited. I motioned to her with the camera again that we were tourists from Australia. But she didn’t understand. Soon after the cops arrived. We were piled into their cars and taken down the cops shop, passing Paul on the way past the pizza shop. The cops insisted on ringing our parents in Perth. When they rang Julius’ old man, who is a semi-famous architect in Australia, waking him at 2am, his old man was proud as fuck. ‘That’s my boy’ he told the cops, ‘his first architectural intervention is trespassing on a Palladian villa.’ We spent the afternoon in a cell, when finally some greasy cop came and let us out.

One thought on “Malcontenta”

This site uses Akismet to reduce spam. Learn how your comment data is processed.